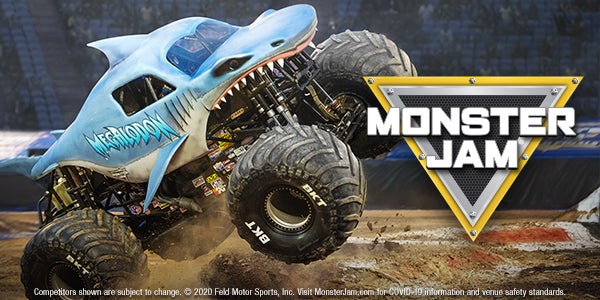 Des Moines fans will witness a fierce battle for the event championship with each skilled Monster Jam athlete tearing up the dirt with gravity-defying feats in 12,000-pound Monster Jam trucks going head-to-head for points in Freestyle, the Skills Challenge and Racing competitions.  Plus, fans can become part of the action by voting for the winner in the Skills Challenge and Freestyle competitions via real-time, in-stadium fan voting on their smartphones.

The all-star truck lineup is headlined by Oskaloosa native Tyler Menninga hopping aboard the legendary Grave Digger. In addition, fan-favorite Adam Anderson trades his black and green wrecking machine for Megalodon®, the truck that redefined the phrase “jumping the shark” and set the GUINNESS WORLD RECORD™ title for the most monster trucks jumped by a monster truck.

Aaron Basl vies for the championship in Devastator and Kaylyn Migues returns in Jailbird respectively. Overbored driven by Jamey Garner and Black Pearl, driven by Cole Venard, round out the epic six-truck lineup.

Monster Jam drivers are trained, world-class male and female athletes who have mastered not only the physical strength and mental stamina needed to compete, but the vital dexterity to control 12,000-pound machines capable of doing backflips, vertical two-wheel skills and racing at speeds up to 70 miles-per-hour to produce jaw-dropping, live motorsports action seen around the world.

At the Monster Jam® Pit Party, you can see the massive trucks up close, watch live pre-race interviews and participate in Q&As with the drivers, get pre-signed autograph cards, take pictures and enjoy other family-friendly fun. It’s an unforgettable part of the Monster Jam experience where special connections are made and lifelong fans are born.

Face covering, social distancing, entry screening and other rules apply. Capacity and activities are limited based on the event, venue, and local authorities’ guidelines, which are subject to change at any time.

Purchase a pit party pass when you purchase tickets

Love being a small part of getting our community vaccinated. Thank you @hyvee @unitedway #211Iowa for hosting today's vaccination clinic!
Congrats to everyone involved in bringing @dewtour to Des Moines this May! Looking forward to welcoming you to our great city! @catchdesmoines @polkcounty_iowa @dsmskatepark @dsmpartnership
Is this weather making anyone else think about their gardens? 🙋 If this is you, purchase your tickets now for the Des Moines Home + Garden show, March 25-28! The show will be spread out in Hy-Vee Hall and we've got plenty of room to social distance. Masks are required for all staff, vendors and attendees. 🌱 Save $3 per online ticket here: http://bit.ly/DMGARDEN
Today we are celebrating #InternationalWomensDay! The Iowa Events Center chooses to challenge inequality and lifts up the amazing women on our staff who inspire us all. From challenge comes change, so let's all #ChoosetoChallenge. #SpectraEmpowersWomen
It's Employee Appreciation Day and we can't say enough about the resilience and hard work our staff has displayed in such a trying year. Our team has found a way to get creative, innovate and find new ways to adapt to our clients and guests needs. Here are just some of the shining stars that make up the the Iowa Events Center full and part-time staff. It truly is a team effort!🌟 #SpectraEmployeeAppreciationDay
The @iowadeerclassic is this weekend! Try out the latest in archery equipment, shop hunting gear, accessories, clothing, blinds, tree stands and more! Bring your bow for our 300 and 3D shoots and attend world-class seminars, plus activities for kids. Friday is night! Ladies get in for $5. Regular admission $12 adult, $5 youth. Tickets available at link in bio!
Our love for you runs deep, and we want to treat you to a date night out this Valentine's Weekend! You could win: 💕A hotel stay at Hilton Des Moines Downtown 💕2 tickets to the Iowa Wild game on Feb. 13 💕 $50 giftcard for dinner at RōCA Enter at our link in bio and comment with the Valentine or bestie you'd bring with you on the date for an extra entry! Winner will be chosen 2/10. Good luck!
Host a dinner but make it socially distanced
New year, new outlook. Can't wait to see you and be together again in 2021!
Merry Christmas from our Iowa Events Center family to yours! 🎄
There’s just something about the way snow makes everything sparkle ❄️✨
Congratulations to our Ticket Office Manager, Jake Reichling, on being named a VenuesNow 2021 Ticketing Star Award Nominee! 🎫 ⭐ Jake leads our ticket office and uses his creativity to build ticketing packages to enhance our guests experience while at our events. He's a wiz at creating reports to simplify ticket analysis and reporting and is the go-to for box offices across the country, serving as a Spectra Box Office Regional. Thanks for all you do to make our events run smooth, Jake! #SpectraGreats
🎄 Deck the Halls with Downloads! Festival of Trees & Lights is moving to a virtual app this year! 🎄 Within the app you can... • Participate in a holiday tree scavenger hunt • Schedule a Zoom chat with Santa • Make holiday crafts and entertainment • Learn cookie decorating and cooking classes for kids • Listen to holiday storytelling • Bid on silent auction trees and wreaths • So much more! Every $5 download benefits Blank Children's Hospital. Look for it in the app store!
Today, and every day, we honor our Veterans. We are forever grateful for your bravery and sacrifices. 🇺🇸
It’s the live music for me. 🎶 Our last Food Truck Thursday is this week with Oreo Meatwagon playing live inside Hy-Vee Hall. Get out of the house and join us! 🍺: $4 🍹: $6 🚐: @topbunfoodtruck and @karamsgrill 🎟: Free