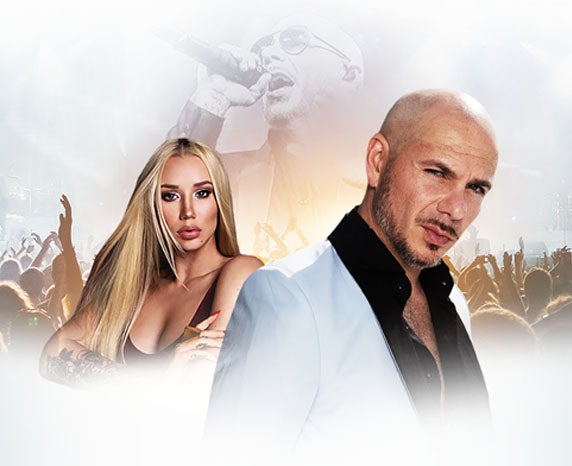 TICKETS: Tickets go on sale to the general public beginning Friday, April 15th at 10am local time at Hy-VeeTix.com. Fans can also register now for early access to tickets for the artist presale at www.pitbullmusic.com/tour. Fans who register for the presale will receive the presale password via text and email 25 minutes before the presale begins.

ABOUT PITBULL: Pitbull invites disruption on a global scale as a GRAMMY®-winning independent international superstar, education advocate, business entrepreneur and motivational speaker. With countless awards, dozens of international number ones, hundreds of gold and platinum certifications, millions of single sales, 25 million album sales, and cumulative video views in excess of 15 billion, one of the most impressive careers in music history set the stage for him to make true change. Not only did he successfully help establish Sports Leadership Arts and Management (SLAM!) tuition-free public charter schools across the country, he was honored by the United Nations General Assembly on behalf of Clean Water Here; he is a partner in eMerge Americas, the annual tech and innovation summit held in Miami; and he was honored alongside music legends as well as Nobel Peace Prize and Pulitzer Prize winners at the 2019 International Achievement Summit. Pitbull and Horizon Media have partnered to launch 305 Worldwide, a new multicultural marketing agency. After announcing several partnerships in 2020 such as Espanita Tequila, LivexLive, and “From Negative to Positive” Podcast, Pitbull ended 2020 with a bang by ringing in the new year performing on the main stage in Times Square. In the first month of 2021, Pitbull became the co-owner of NASCAR racing team [Team Trackhouse], and proudly served as the Grand Marshal of the 2021 NASCAR Daytona 500. At the same time, he only continues to expand his influence across fitness, health, and wellness. He launched 305-Life as the first daily supplement line to philosophically reflect the vibrant spirit of Miami through its high quality product. As an investor and brand ambassador, he joined forces with Echelon for the “Pitbull X Echelon” partnership, providing Pitbull-themed rides to millions of users exclusively in the Echelon Fit App. He also teamed up with Columbia Care to introduce his own CBD line, N2P—an acronym for one of his most famous mantras “negative to positive.” He returned to the road in 2021 with the sold out I Feel Good Tour, packing arenas and amphitheaters coast-to-coast. Speaking of, Pitbull has performed for millions worldwide and even joined forces with the #1 life and business strategist, Tony Robbins, for numerous engagements around the globe. He maximizes his own creative, entrepreneurial and personal freedom, yet again, on his next long-awaited English album, coming soon.

ABOUT IGGY AZALEA: Iggy Azalea is a Grammy-nominated and multi-platinum selling Australian musician who has become one of the most accomplished artists in music history. Her 2014 debut album The New Classic, which debuted at #1 on the Billboard Charts - a first for an international female artist, spawned a US chart topping trifecta of worldwide #1 multi-platinum smash hits: “Fancy” (featuring Charli XCX, 8x-platinum); “Black Widow” (featuring Rita Ora, 4x platinum); “Problem” (collaboration with Ariana Grande, 6x-platinum). “Fancy” was the longest leading Hot 100 #1 hit by a female rapper in chart history, Billboard’s 2014 Song of the Summer, iTunes Best Song of 2014, the year’s most-streamed song on Spotify, and the most-watched music video on Vevo. While “Fancy” was still residing at #1 on the Hot 100, “Problem” – Iggy’s collab with Ariana Grande – peaked at #2. Iggy had made chart history again, this time as the first artist since the Beatles to rank at #1 and #2 simultaneously with their first two Hot 100 hits. Iggy Azalea’s videos have amassed over 3 billion views to date. In late Summer 2021, Iggy will release her highly anticipated third studio album titled End of an Era.