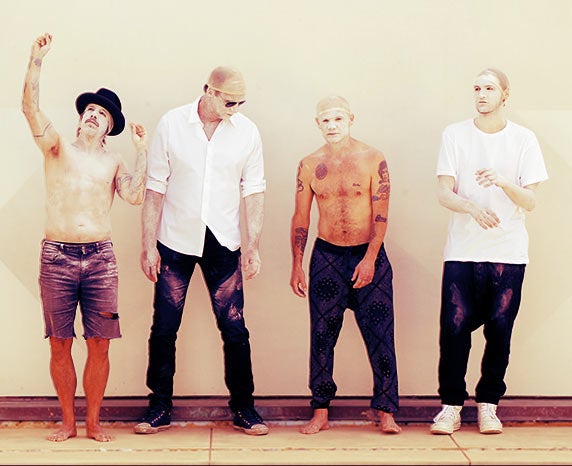 Red Hot Chili Peppers have announced additional spring dates on their 2017 North American Tour in support of their 11th studio album, the worldwide No. 1 The Getaway.

As previously announced, The Getaway Tour kicks off January 5th, 2017, in San Antonio, TX, and crisscrosses North America through mid-March. A spring leg of the tour has been added, which begins April 12th in Washington, DC and will include a stop at Wells Fargo Arena in Des Moines on May 23, 2017. Reserved seat tickets ($100 / $50) go on sale to the general public on Friday, November 11th at 10:00 AM at Hy-VeeTix.com, 844-55-HYVEE, the Arena Box Office or any Des Moines/Ames Hy-Vee locations. Four ticket limit – strictly enforced. Every ticket purchased includes a choice of a standard physical or standard digital copy of The Getaway. A fan club ticket pre-sale for the new shows launches on November 9th.

The Getaway debuted at #1 on the Billboard Album Sales Chart and at #2 on the Billboard Top 200 upon its release in June. The Getaway marks the Grammy Award-winning band's seventh top 10 album and third #2 on the Top 200 Chart. The album debuted at #1 in Australia, Belgium, Ireland, Netherlands, and New Zealand and at #2 in the United Kingdom and Germany. The Getaway was produced by Danger Mouse and mixed by Nigel Godrich.

One of the most successful acts in rock history, Red Hot Chili Peppers, which is singer Anthony Kiedis, bassist Flea, drummer Chad Smith, and guitarist Josh Klinghoffer, have sold more than 60 million albums, including five multi-platinum LPs, and won six Grammy Awards, including "Best Rock Album" for Stadium Arcadium, "Best Rock Performance By a Duo or Group" for "Dani California," "Best Rock Song" for "Scar Tissue," and "Best Hard Rock Performance With Vocal" for "Give It Away."  The band was inducted into the Rock and Roll Hall of Fame in April 2012. The Red Hot Chili Peppers' last studio album, The Getaway, was released by Warner Bros. Records on June 17, 2016.