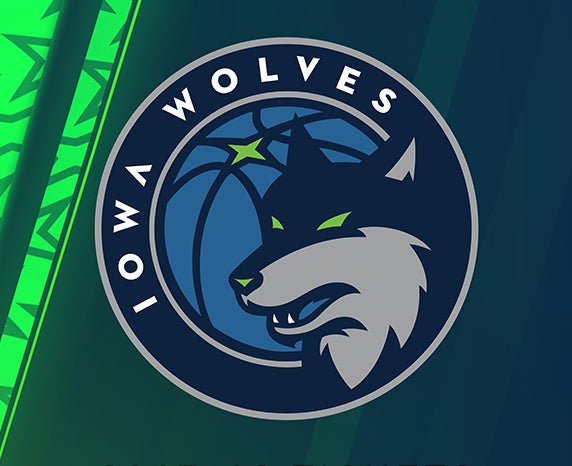 Minneapolis-St. Paul – The Minnesota Timberwolves today unveiled the new name and identity for their recently acquired NBA Development League Affiliate in Des Moines. The team, formerly the Iowa Energy, has been renamed the Iowa Wolves, and their new logo and wordmarks can be downloaded at www.timberwolvesmediacenter.com.

“I am very excited to bring the Iowa Wolves into our family and to continue to expand the footprint of the Timberwolves throughout the Upper Midwest,” said Timberwolves Majority Owner Glen Taylor. “We explored many options as we looked to acquire a Development League team and in the end, it was the success of the franchise that existed here, the proximity to the Twin Cities and the vibrant nature of the city of Des Moines that made Iowa the clear choice. I already have farm land and several business interests in Iowa so I know that it’s a great place to do business.”

The name and identity was unveiled in Des Moines this afternoon during a press conference to officially welcome the team to the Timberwolves organization. Speakers at the event included Timberwolves Majority Owner Glen Taylor, President of the NBA Development League Malcolm Turner, Timberwolves Head Coach & President of Basketball Operations Tom Thibodeau and Timberwolves CEO Ethan Casson.

"A Development League Team is a great asset for the Timberwolves and gives us an opportunity to further develop young players,” said Timberwolves President of Basketball Operations and Head Coach Tom Thibodeau. “The growth of this league and the benefits to having both younger and veteran players alike gain playing time is invaluable. It’s also a great asset to have players learn our system and aid in the rehabilitation process of players coming back from injury. We will be very hands on with the basketball staff here, ensuring they teach players how we want to do things at the NBA level.”

The Iowa Wolves rebrand follows the Timberwolves own unveiling of a new logo this past April. The logos were created by the same designer, Rodney Richardson of RARE Designs, whose resume includes recent identity designs for the NBA’s Charlotte Hornets, New Orleans Pelicans, Atlanta Hawks and Sacramento Kings. The logo is meant to give a nod to the original Timberwolves logo while serving as a mark that aligns the two teams. More on the Iowa Wolves logo meaning and creation process is explained by Rodney Richardson in a video that can be viewed here.

“It’s an exciting day for the Timberwolves organization to officially welcome this Des Moines team into our pack,” said Timberwolves CEO Ethan Casson. “They are joining us at a very exciting time for the Timberwolves, with so much happening on and off the court. We look forward to finding ways that these two teams can support each other through marketing, corporate partnerships and ticket sales. We’ll also look for ways we can integrate ourselves and help support the local community.”

The Timberwolves finalized the purchase of the Iowa organization on May 3, 2017. They are now one of 26 teams to own or operate an NBA Development League affiliate.

“I’m thrilled to officially welcome the Timberwolves organization to the NBA D-League,” said NBA Development League President Malcolm Turner.  “NBA D-League basketball is the best outside of the NBA and has established a rich history and a deep fan base in Iowa.  We look forward to continuing to offer development opportunities in Des Moines for years to come.”

This announcement is the latest in a series of announcements tied to the new era of Timberwolves basketball. With new leadership on the court and in the boardroom, the franchise is poised for more significant changes in the coming months. Target Center’s renovation project, complete with new premium spaces, seating and concourse improvements, is expected to hit the finish line in time for the beginning of the 2017-18 season. The team’s limited partnership group now includes the first Chinese minority owner in major professional sports, John Jiang, in addition to New York real estate mogul Meyer Orbach. The franchise will also enter its first season with the Iowa Wolves for the 2017-18 season.